skip to main | skip to sidebar

Well, we’ve returned home from a "three hour tour” that turned our “Gilligan’s Island” into a nine day excursion starting in Santiago and ending Savannah. To our amazement and delight, three sold out shows in Chile and always an extreme pleasure to play for our Chilean audiences. It appears we’ll be returning as soon next October to their southern climbs and perhaps 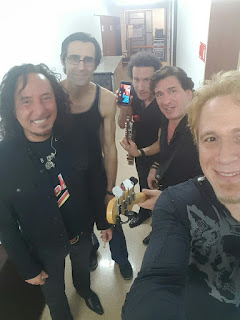 The “Blizzard of 2017” couldn’t keep us from our next engagement in Georgia so rather then return home thanks to a touch of the flakey white stuff and cancelled flights all along the eastern seaboard, we headed onto to Savannah a day earlier sans luggage and deodorant and had the golden opportunity to taste some of this quaint city's finer delicacies. It’s Gumbo, Fried Chicken, She Crab Soup and Fried Green Tomatoes! (Are you hungry yet?)

Then on to a last minute venue change that could have been disastrous but instead may have turned out to have been the highlight of the entire trip thanks the incredibly enthusiastic Savannah crowd who assisted us in blowing the roof off that sucker!

Thanks to my bandmates Adam Holland, Craig Pullman, Tobias Ralph, and Gerard Zappa who held it all together especially our “Ace” FOH engineer Phil Castellano who worked what will be affectionately forever known as the  “Miracle on Abercorn St.”
A proverbial Rabbit out of his hat:-)

Another day in the life of The Steve Augeri Band.

’Til we meet again…
Steve Augeri